The original rich dessert cake made with imported cream and soft cheese on crumbly cookie crust. Can be sliced up to 24 portions. Default are 12 portions.

Please order one day in advance! 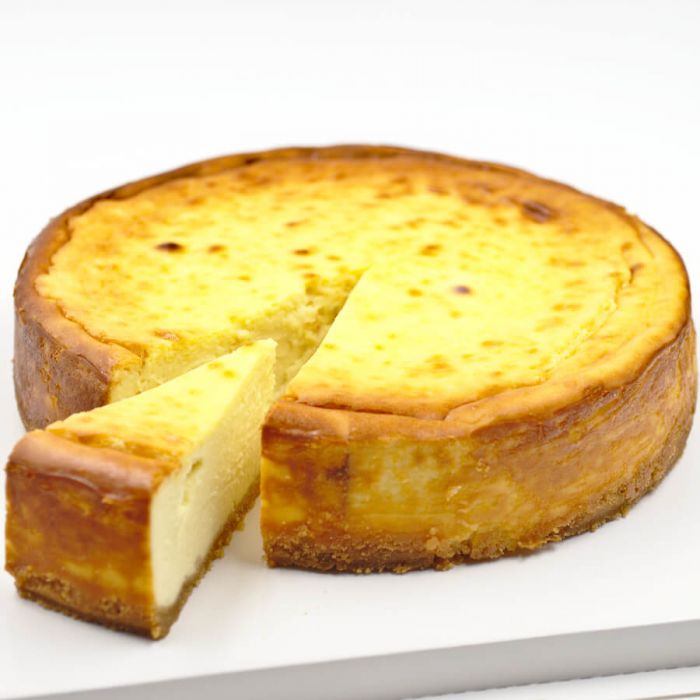 This is a heavy cheesecake, soft and moist in texture, solid in taste, full-bodied cheese fragrance twining around the taste buds. Perfect match for afternoon tea.

Cream cheese, sugar, sour cream, egg, milk, flour, vanilla syrup and our very own biscuits to serve as a base.

Please eat the cheese cake once you receive it. If you must keep it to next day, then refrigerate it.

The first “cheese cake” may have been created on the Greek island of Samos. Physical anthropologists excavated cheese moulds there which were dated circa 2,000 B.C. Cheese and cheese products had most likely been around for thousands of years before this, but earlier than this goes into prehistory (that period in human history before the invention of writing) so we will never really know. In Greece, cheesecake was considered to be a good source of energy, and there is evidence that it was served to athletes during the first Olympic games in 776 B.C. Greek brides and grooms were also known to use cheesecake as a wedding cake. The simple ingredients of flour, wheat, honey and cheese were formed into a cake and baked – a far cry from the more complicated recipes available today!

The writer Athenaeus is credited for writing the first Greek cheesecake recipe in 230 A.D. (By this time, the Greeks had been serving cheesecake for over 2,000 years but this is the oldest known surviving Greek recipe!) It was also pretty basic - pound the cheese until it is smooth and pasty - mix the pounded cheese in a brass pan with honey and spring wheat flour - heat the cheese cake “in one mass” - allow to cool then serve.

When the Romans conquered Greece, the cheesecake recipe was just one spoil of war. They modified it including crushed cheese and eggs. These ingredients were baked under a hot brick and it was served warm. Occasionally, the Romans would put the cheese filling in a pastry. The Romans called their cheese cake “libuma” and they served it on special occasions. Marcus Cato, a Roman politician in the first century B.C., is credited as recording the oldest known Roman cheesecake recipe.

As the Romans expanded their empire, they brought cheesecake recipes to the Europeans. Great Britain and Eastern Europe began experimenting with ways to put their own unique spin on cheesecake. In each country of Europe, the recipes started taking on different cultural shapes, using ingredients native to each region. In 1545, the first cookbook was printed. It described the cheesecake as a flour-based sweet food. Even Henry VIII’s chef did his part to shape the cheesecake recipe. Apparently, his chef cut up cheese into very small pieces and soaked those pieces in milk for three hours. Then, he strained the mixture and added eggs, butter and sugar.

It was not until the 18th century, however, that cheesecake would start to look like something we recognize today. Around this time, Europeans began to use beaten eggs instead of yeast to make their breads and cakes rise. Removing the overpowering yeast flavor made cheesecake taste more like a dessert treat. When Europeans immigrated to America, some brought their cheesecake recipes along.

The nutritional value of cheese:

Cheese is rich in protein, vitamin A, D and biotin, which can promote the ability of human body to resist diseases, promote metabolism and enhance vitality.

The lactic acid bacteria and their metabolites in cheese have a certain health care effect on human body, which is conducive to maintaining the stability and balance of normal flora in human intestine.

Cheese has more fat and heat, but its cholesterol content is lower.

More Information
Reviews
No reviews yet ... Have an opinion? Help others decide. Share your knowledge about this product by submitting a review.
Compare Products
Compare
Clear All
You have no items to compare.
My Wish List
Last Added Items
Go to Wish List
You have no items in your wish list.