Made with minced beef, onion, garlic, celery and leek in a rich tomato sauce layered with pasta and a creamy cheese sauce. Served with salad and garlic bread on a side. 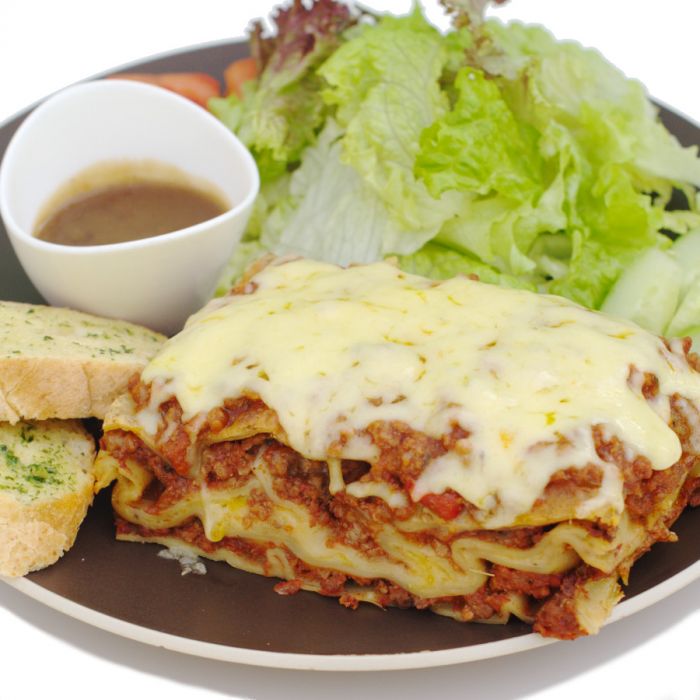 The rich flavor of the meat sauce is fragrant. It is sandwiched multiple times between pasta sheets, bechamel souce and covered with lots of cheese. Every bite is soft and chewy.

Assembly of the Lasagne:

Lasagna tastes best hot out of the oven. If you must keep it to next day, then refrigerate it.

Lasagna is a famous delicacy in Emilia-Romagna area of Italy. It is named after the name of the main city in the area: Bologna.

The earliest written records of Lasagna recipe can be traced back to the 14th century to be found inside a Naples cooking book.

Different flavors of meat, pasta, cheese, tomatoes and sauce overlap and create a rich, satisfying and filling meal, which is at the same time so tender it just melts in the mouth……

More Information
Reviews
No reviews yet ... Have an opinion? Help others decide. Share your knowledge about this product by submitting a review.
Compare Products
Compare
Clear All
You have no items to compare.
My Wish List
Last Added Items
Go to Wish List
You have no items in your wish list.