Juicy and sweet pineapple with fresh and tender ham - Hawaii Pizza - the sunshine combination! Who would have thought adding fruit to your pizza could taste so delicious? 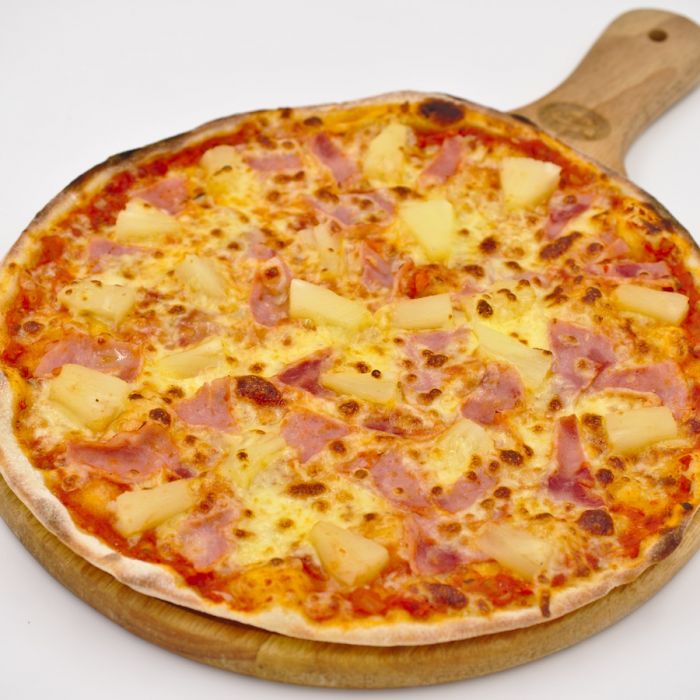 Fresh, sweet and sour pineapple, mixed with the mellow cheese and salty ham, results in a wonderful experience.

Assembly of the Pizza:

Sam Panopoulos was born in 1934 in a Greek town called Vourvoura. Sam has been very interested in eating since he was a child. He has learned a lot of Greek and Italian food. His aspiration was to be a chef.

In 1954, in order to make a better living, young Sam and his whole family immigrated to Ontario, Canada. He and his two brothers opened several restaurants in Chatham City, Canada.

In the early 1960s, Sam noticed a new trend of food at that time, Italian pizza began to be popular in big cities in the United States. This trend went all the way north and became more and more popular. At that time, there were several Italian pizza restaurants in Detroit. Because Detroit was only 80 kilometers away from Chatham, Canada, the trend also affected Canadians.

So in 1962, Sam decided to sell pizza in his own restaurant. But he soon noticed a problem…

"There were so few popular kinds of pizza! There was mushroom pizza, pepperoni pizza, bacon pizza and not that much more. People didn't have much variety and food choices. Almost everything was a bit tasteless." - Sam once said in an interview with the BBC.

So one day, when Sam was making pizza, he suddenly saw a can of pineapple on the table. He had a wonderful idea …

"Can you add a new flavor to pizza? Sweet and sour, for example?“ wondered Sam. At that time, the only dish with sour and sweet taste was Chinese sweet and sour pork meat with pineapple in it, but putting fruit in other dishes would be regarded as "inexplicable" and "food waste". "But Sam still put pineapple on the pizza“. He said "I don't know what pineapple pizza will taste like. It's was just playing around." "We were a group of young chefs who often do strange experiments."

Sam thought pineapple would loose all water, because of the high temperature, and would not taste well, but in fact, it wasn't. He and his brothers tasted some, fresh, sweet and sour, mixed with the mellow cheese and salty ham... Very delicious!

They gave this dish to the customers in the shop, and many liked it. Over next few months, guest came into the restaurant asking for "pineapple pizza," so Sam added it to the menu.

Because the brand name of canned pineapple used by Sam was "Hawaii", Sam named the dish "Hawaii Pizza"

Since then, Hawaii pizza has spread all over the city, the whole province, Canada, the United States, Europe, etc. Now, unless it is a traditional Italian restaurant, you can find Hawaii pizza in many pizzerias around the world.