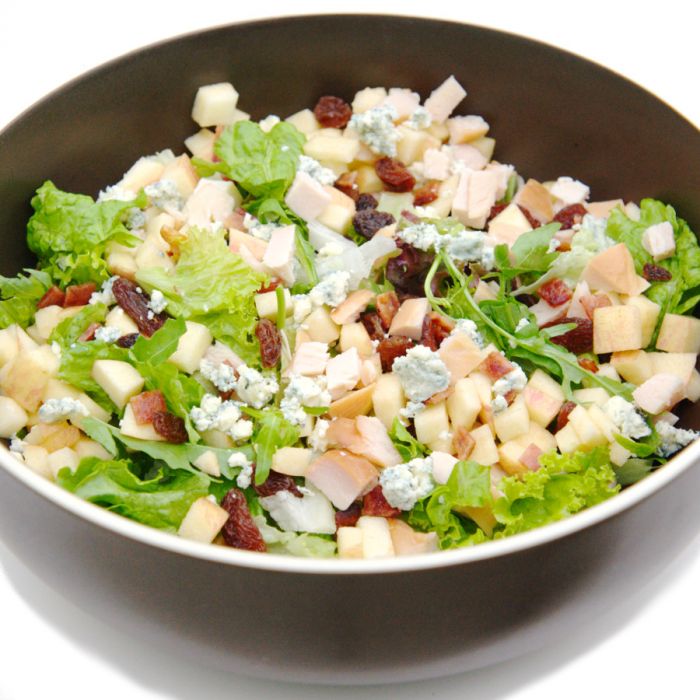 The rich blue cheese is covered with fresh crisp vegetables, accompanied by roasted chicken breast and bacon. With crisp and sweet apples and raisins to balance the rich cheese, you can have the satisfaction of one mouthful.

Method of preparation for roasted chicken:

Method of preparation for salad:

Please eat the salad once you receive it. If you must keep it to next day, then refrigerate it.

Blue cheese, with a history of more than 2000 years, is a kind of semi soft cheese. The reproduction of penicillium makes the cheese form a beautiful blue pattern. Its taste is more spicy and strong than that of white mold cheese. Different from other cheese varieties, blue cheese tends to mature from the center to the outside.

It is said that the birth of blue cheese was actually an accident: a cheese maker threw half of his rye bread into the barrel with cheese, and found that the cheese had a beautiful blue pattern after a period of time. It was originally caused by the large-scale reproduction of mold on the bread in the barrel. When the cheese maker found out, he did not throw it away directly, and even tasted it boldly, So blue cheese was born.

For many centuries, blue cheese has been made in an ancient way. Rye bread and cheese are stored together in a cool and humid cave for fermentation. The mold on rye bread grows a Penicillium after contacting the cheese, which naturally forms a blue-green mold texture in the pure white cheese.

Because Penicillium require sufficient oxygen, the whole cheese should be pricked with needles so that air can enter the cheese. This method can make the inside and outside of cheese form blue mold lines.

Because blue cheese became very popular. After very many experiments, the cheesemakers finally developed a commercial strain, which was later widely used in the production of blue cheese.

In the process of cheese ripening, cheese makers play a decisive role. One of the most critical steps in the perfect transformation of cheese is the process in which pure white cheese is infused with Penicillium until it matures.

Generally speaking, after the injection of Penicillium, it grows continuously inside the cheese. At this time, the salt on the cheese surface begins to melt. This change will take place in 14 to 25 days. The time difference is up to 11 days. In this critical period, they will check the growth degree of cheese at different time points every day without fail.

Dairy products are the best choice for food calcium supplement. Cheese is the most calcium containing dairy products, and these calcium are easy to absorb. In terms of calcium content, 250 ml milk = 200 ml yogurt = 40 g cheese.

The lactobacillus and its metabolites in cheese have a certain health care effect on human body, which is conducive to maintaining the stability and balance of normal flora in human intestine, and preventing fecal secretion and diarrhea.

Cheese has a lot of fat and heat energy, but its cholesterol content is relatively low, which is good for cardiovascular health.

People eat some cheese at dinner to help prevent caries. Eating foods containing cheese can greatly increase the calcium content in the surface of teeth, thus inhibiting the occurrence of caries.